Fall 2017 Update on Transition to CAMRT-BC

As you know from communications throughout 2017, the June vote of BCAMRT members resulted in the adoption of a new association model for the province. In the new model, provincial services you are accustomed to receiving from BCAMRT, such as provincial advocacy, provincial updates and networking, local events, and more will be delivered by a new unit of the CAMRT dedicated to BC: CAMRT-BC.

In the months that have followed the June vote, the CAMRT collaborated closely with BCAMRT to establish and ramp up the new CAMRT-BC. The goal of CAMRT-BC is to deliver a similar offering of provincial member services to MRTs in BC for less in dues. There are some important changes coming (or that have come already) that are worthy of note: 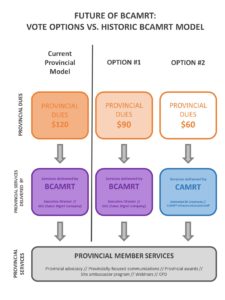 June Vote on the Future of the BCAMRT

An online vote of BCAMRT members was held between May 31 and June 18 to determine the future of the BCAMRT. The vote resulted in the adoption of a new association model where the provincial services you are accustomed to receiving from BCAMRT, such as provincial advocacy, provincial updates and networking, local events, and more) will be delivered by a new unit of the CAMRT, dedicated to BC, called CAMRT-BC. Just under 40% of the BCAMRT membership cast their votes in this referendum, and 56.4% of these ballots were cast in favour of the CAMRT-BC option.

This result gives BCAMRT and CAMRT the mandate to work together to implement the transition to the CAMRT provincial service delivery model in BC by December 31, 2017.

Members voted on two possible options for the future of the BCAMRT (please see here for a table outlining the two options and the differences between them).

May 2017 FAQs document about the Future of the BCAMRT

Prior to the vote, we prepared answers to a range of questions from BC members. Please see here for answers to all the questions you may have about this crucial period for the BCAMRT.

Future of the BCAMRT webinars

The BCAMRT and CAMRT also collaborated to deliver a number of presentations on the future of association services in BC. All were recorded for your viewing and consideration.

This presentation is from the 2017 Annual General Conference.

BCAMRT: Charting the Course for the Future

This webinar was presented on March 20, 2017 by BCAMRT President Jackie Wallace, BCAMRT Executive Director Darlene Hyde, and CAMRT Representative Christopher Topham. The presentation explores options for the BCAMRT going forward, with regards to improving efficiencies and a discussion of potential dissolution of the BC chapter and incorporation into the CAMRT.

As promised, a final confirmatory vote took place between May 31 and June 7, 2019.  Approximately 19% of the membership voted, with an 88% approval to stay with the CAMRT-BC model. This provided a clear mandate to continue with the activities and initiatives which took place in the 24 months prior to the vote.   The formal dissolution of the BCAMRT will occur in early 2020.