What’s in a name?

Home About CAMRT History of the CAMRT What’s in a name? 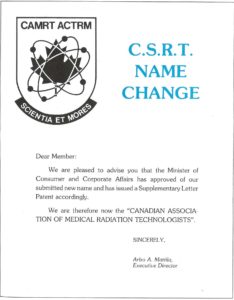 MRTs have been witness to immense change over the past 75 years, in professional practice, in technology, and even in the terms used to refer to one another as professionals. The story of the name for the national association (or Dominion Society as it was known in the 1940s) is a fascinating illustration of professional evolution.

Back in 1943, there were 8 provincial societies in place from BC to Nova Scotia (PEI and Newfoundland would come later), and even those associations varied in how they recognized the profession.

The founders of CSRT favoured the Alberta terminology, and chose what they probably thought would be a name that would endure for decades to come. Unbeknownst to those founding members were the technological and professional leaps forward that were to come in medical imaging and radiation therapy, and that the need to keep up with the times would include adapting the name of the profession and association, too.

That year, a resolution was submitted by the New Brunswick Division of CSRT noting that the term “Technician” was used in many fields, and that the profession would benefit from using a more unique term. The term suggested in the resolution was “radiographer”, a name they pointed out was already in use by the majority of members in the ISRRT. The resolution (the first in a string over resolutions of more than a decade) suggested that CSRT change its name to the “Canadian Society of Radiographers”. The motion was agreed, but then tabled for the future.

A few years later, the issue surfaced again. This time the term “technologist” was preferred. A motion made at the 1969 AGM by Poitras/Bussieres proposed to replace the term “Technician” with “Technologist”. A supplementary resolution then suggested the addition of the now familiar “Medical” term to technologist in the society’s title. While there was a move to table the discussion, that was defeated and instead a committee was struck to bring recommendations to the next AGM.

But name change was not in the cards in 1970, following recommendations that, for reasons of cost and inconvenience, the society name should remain unchanged. The interesting twist that the Canadian Society of Inhalation Therapists had changed its name to CSRT (Canadian Society of Respiratory Therapists) may also have added some fuel to the fire, but did not sway the decision.

In 1973, motions were back on the floor to change the association name (and with it the terminology its professionals used to describe themselves in Canada). Clark and Taylor submitted a motion that year to change the name of the society to the Canadian Society of Medical Radiation Technologists (we’re getting close!). Once again cost was discussed (in quite some detail), and another committee was struck to examine the name change, and once again the committee recommended against changing the name.

Motions were again submitted ahead of the 1977 meeting in Hamilton. Martha Pearce and James D. Clark of Nova Scotia moved that the society change its name to the Canadian Association of Medical Radiation Technologists. Reasons for supporting the name change were made clear:

WHEREAS the name of our professional society no longer reflects the diversified role of the technologists’ responsibilities; and
WHEREAS the monopoly of x-radiation as a diagnostic tool has passed, and several other radiations are now used as aids in diagnosis; and
WHEREAS the Society is investigating a broader base for its membership;
THEREFORE BE IT RESOLVED that proceedings be initiated to change the name of this Society to the “Canadian Association of Medical Radiation Technologists”.

Provinces in favour of the change were: Saskatchewan, Manitoba, Ontario and Quebec. Against were Alberta and New Brunswick, with the rest undecided. After some (no doubt lively) discussion, the motion to change the CSRT name was finally carried by a vote of the general membership (1005 in favour to 451 against).

Following the vote, the wheels were set in motion. A display of proposed logos for the newly-named CAMRT were on presentation for all delegates to peruse and vote on at the 1978 AGC. And the rest, as they say, is history.

From our point of view in 2017, this is an interesting history and progression. Consider for a moment the real fervour that accompanies the mere mention of the term “technician” in the company of an MRT, and it is now hard to imagine this debate from 40 years ago.