Founding of the Dominion Society

The history of those operating the various devices that emitted x-rays extends virtually all the way back to Wilhelm Roentgen’s discovery in 1895. As innovations go, the discovery of x-ray must surely be counted as one of the most rapidly adopted, since physicians across continents were using this new technology in their offices within months. As quickly as the equipment spread, so too did the need for people specialized in its use.

By the 1920s, the profession of x-ray technicians (under its various names) was becoming established. In fact, in the year 1920, both the Society of Radiographers in Britain and the American Society of X-Ray Technicians in the US were founded. Canada was not to be far behind.

They assembled a National Organization Committee, with Ethel Pugen of Toronto as chair, and presented plans and a constitution to the Canadian Medical Association and Canadian Association of Radiologists at their joint meeting in 1938. Both these organizations endorsed this initiative, and Dr. William McGuffin was appointed to head the “Technician Committee” for the CAR.

A first step in national organization was to expand into other provinces. Over the next five years, provincial associations sprung up across Canada: Alberta, Saskatchewan, Quebec, New Brunswick and Nova Scotia in 1940; and British Columbia in 1943.

The first meeting of the Board of Directors for the Dominion Society was held in Toronto in 1942, where requirements for membership were determined and the groundwork for certification laid. A Memorandum of Agreement was also developed and an application made for a Dominion Charter to form the Canadian Society of Radiological Technicians (CSRT). The CSRT Dominion Charter was finally granted in May 1943 to founding (charter) members: Dr. William Colbeck (Radiologist, Welland, ON); his wife, Sadie Storm (Welland, ON); George Reason (Toronto, ON); Mary Cameron (Hamilton, ON); Claude Bodle (Winnipeg, MB); Rosemary O’Hagen (Mo 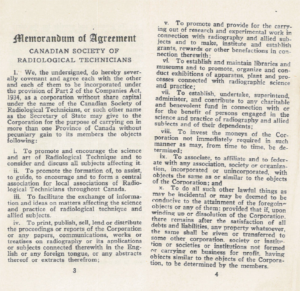 Progress continued from there at a rapid pace, with the First Annual Meeting of the CSRT in September 1943, an adoption of a crest and motto (“Scientia et mores” meaning “Knowledge and Ethics”) for the society, and the 1944 launch of a national publication: The Focal Spot (note: The Focal Spot itself was an evolution of the earlier Ontario Society publication, The Radiographer).