The complete CAMRT 2020 Celebration of Excellence recording is now available for viewing. Congratulations to all our award recipients! 🎉

The CAMRT Honorary Awards are a collection of awards presented to members at the pinnacle of the profession. The winners of these awards earn the highest recognition from their association by their dedication, commitment and exceptional contributions to our profession. Due to the restrictions of the COVID-19 pandemic, this year the award recipients are being recognized virtually and their awards will be presented to them in person at CAMRT 2021 in Ottawa, Ontario. Life Membership at CAMRT represents the highest form of recognition by one’s peers and is designed to honour a member of the CAMRT who has given distinguished service to the Association. A Life Member is an individual who has supported their profession and professional association at the provincial, national and international levels throughout their career, and whose leadership has served to motivate others to become involved in professional activities.

The CAMRT is pleased to present this award to Carol-Anne Davis, RTT, ACT, FCAMRT, from Nova Scotia.

Carol-Anne’s contributions include all the realms of a recognized leader within the practice of medical radiation science, and also includes interprofessional collaboration, an essential aspect of leadership within our practice. Her long-term commitment and passion to the profession and service exemplifies the values of the CAMRT: Transforming Education; Evolving Practice; Quality of Care; Evidence and Knowledge; and Membership Value. These lived-values make Ms. Davis stand out as an ideal candidate for the Life Membership Award. We look forward to highlighting even more of her outstanding accomplishments at our Celebration of Excellence in 2021. The Welch Memorial Lecture was established in 1951 to honour Mr. Herbert M. Welch, one of the pioneer members of the Association. To be chosen to deliver this lecture is considered an honour, which is bestowed upon a member of the CAMRT who has made an outstanding contribution to the profession at a national level. The recipient must have influenced the growth of the profession in clinical practice, education, research, and/or administration. The Welch Memorial Lecture may be on the lecturer’s topic of choice.

The CAMRT is pleased to announce Nicole Jenkins, RTR, RTMR, from Newfoundland as the Welch Memorial Lecturer.

Nicole is a champion for life-long learning, preceptor to countless students and has delivered an impressive list of presentations. She has influenced and delivered education locally and nationally. A champion for learning, she exemplifies the philosophy that every issue, concern or experience can be a learning opportunity, where MRTs can improve themselves and their practice, rather than feel shame or embarrassment. Nicole is a co-founder of the Atlantic MRT Conference, with a mandate for putting the technologist before the technology. There is so much more to be said about Nicole’s accomplishments and we hope you can join us in celebrating her, and attending her lecture, at our 2021 event.

This award was established in 1957 to honour a member of the CAMRT who has made a significant contribution to the profession and/or association, at a national level, in the field of education.

The CAMRT is pleased to present this award to Christina Zeller, RTT, ACT, from Manitoba.

Chris has always been an active and passionate advocate for not only Radiation Therapy, but all MRT disciplines. She has sat on numerous CAMRT and MAMRT committees (past and present) as well as received numerous awards from the MAMRT. She played a key role in converting the Radiation Therapy program from a diploma to a degree at the University of Winnipeg. She has also been published in JMIRS. Chris is a lifelong learner and has a passion for continuing education, volunteering and the importance of being engaged in the MRT profession and its associations.

Steward of the Profession Award This award honours a CAMRT member who has advocated for, and worked to advance, the profession at both the national and provincial levels. The award recognizes those who have made a significant contribution as a volunteer, led others to become involved and then supported them with mentorship, advocated on behalf of the profession and patients, and supported efforts to raise the standards of the profession.

The CAMRT is pleased to present this award to Dayna McTaggart, RTR, CTIC from Manitoba.

Dayna joined the Manitoba Association of Medical Radiation Technologists Board just one year after graduating, ultimately holding the role of President for four years. During this time she worked hard to ensure that policies, by-laws, the strategic plan, awards and other important documents were reviewed and updated for the benefit of the board and members. She recruited ambassadors for rural sites in Manitoba so they would have champions to communicate provincial information to MRTs at their site. Dayna has volunteered with CAMRT as well in several ways but notably on the Rebranding Committee. She is always thinking of new ideas to provide patients with medical diagnosis with minimal risk, and how to engage provincial and national members with their associations. The CAMRT is pleased to present this award to Jason Lewis, RTR, from Manitoba.

Soon after graduating in 2015 Jason became involved in volunteering with the Manitoba Association of Medical Radiation Technologists joining their Board of Directors in 2016 as Director of Finance. Growing and developing during three years in that role has gained Jason the support and appreciation of the Board and the membership, resulting in his election as Board President. Through his position at Red River College, Jason played a pivotal role influencing students and instilling the essential components of professional competence and pride. It is an impressive beginning to what is sure to be a long career of achievement and giving back to the profession. The CAMRT is pleased to present this award to Brenda Hubley, RTT, ACT, from Alberta.

Brenda is a role model for any MRT. She provides stellar leadership and has risen to the position of Chief Program Officer, CancerControl Alberta which is the highest position. She served on the CAMRT Board from 2004-2008 and is often invited to speak at events where she always acknowledges that she is a radiation therapist. Currently she is a board member for the Alberta Cancer Foundation and serves on many other high profile committees. She is a strong advocate and role model for all MRTs and flies her MRT flag proudly when she addresses audiences across the country.

Award of Excellence – highest score on the 2019 CAMRT certification exam: 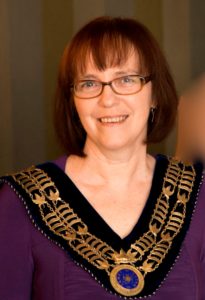 This Board Recognition award is both selected and presented by the current CAMRT President to honour an individual or group who has realized an outstanding achievement, or who has made a difference in their life.

President Gailyne MacPhearson is pleased to present this recognition to Past President Deborah Murley, RTR.