CAMRT-ATL has met with a number of government officials in the past months. Our focus has been on a number of key issues:

Health Human Resource Crisis and Adequate Staffing: Provincial statistics have shown that over the last 10 years, the volume of imaging and therapy appointments has grown dramatically, but there has not been a matching rise in MRT numbers. Extension of hours has been a short term solution but it is not a long term one. The issue is proving that departments and clinics have been woefully understaffed for years, and that the typical metric of vacancy rates is not the best to use. To match the demand for service, the number of positions has not been enough for quite some time. Therefore, vacancy rates do not show the whole picture. CAMRT-ATL has been advocating for increased MRT positions in departments to sufficiently meet demand.

Recruitment and Retention: CAMRT-ATL has been reiterating the necessity to include MRTs in any and all retention efforts. The areas of Radiation Therapy and Diagnostic Imaging are expanding. Currently there needs to be retention efforts to keep the staff that are there, and recruitment to gain additional staff to fill positions. CAMRT-ATL has asked MLAs to include MRTs when advocating for retention incentives and recruitment initiatives.

Burnout: Statistics from the CAMRT Mental Health Survey show that the rates of burnout have risen in Atlantic Canada. Discussions have centered around the emotional burden from the work MRTs do, the volume professionals are expected to deal with, and how the pandemic heightened that. CAMRT-ATL is advocating that governments recognize and include the MRT profession in their deliberations on this healthcare system-wide problem, and that resources given to other professions are given to MRTs as well. We were very pleased when the New Brunswick Health critic, M. Jean-Claude D’Amours, took the time to stand up in the legislature to voice these MRT concerns directly to the health minister.

CAMRT-ATL met with the Minister of Health Bruce Fitch in September of 2022. 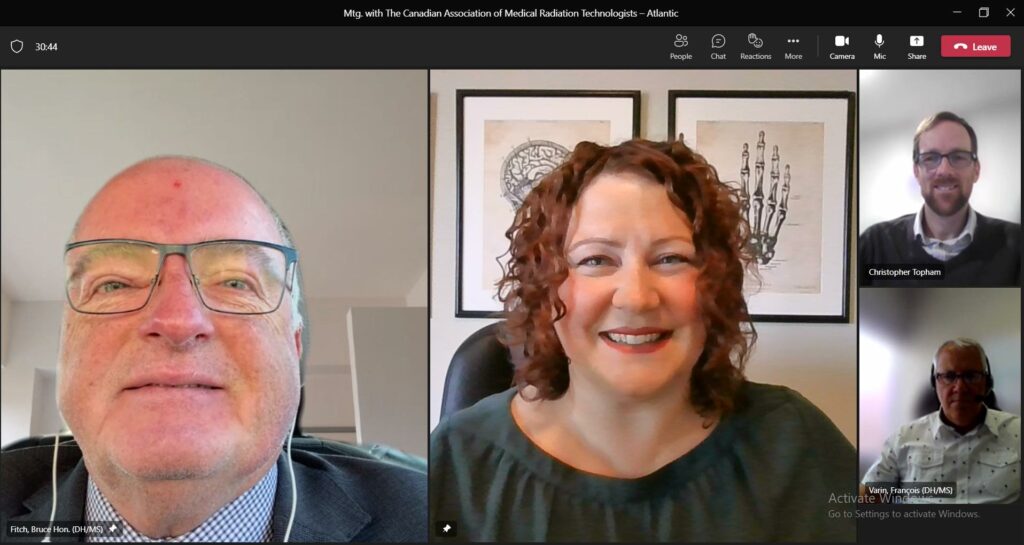 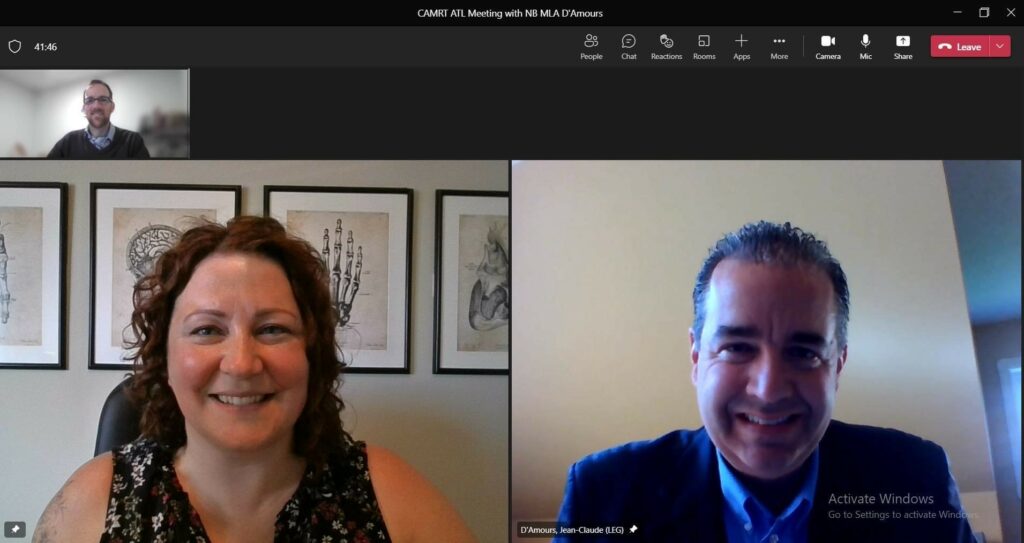 CAMRT-ATL was very pleased when M. Jean-Claude D’Amours, took the time to stand up in the legislature to voice these MRT concerns directly to the health minister. You can read the transcript HERE and looking at pages 11-12.

CAMRT-ATL was also able to meet with Green Party shadow minister for health, Megan Mitton. We were able to collaborate with Megan for a Freedom of Information Request looking at the wait times for Diagnostic Imaging exams in the province.

CAMRT-ATL was pleased to meet with PEI Minister of Health and Wellness Ernie Hudson and Deputy Minister Lisa Thibeau. 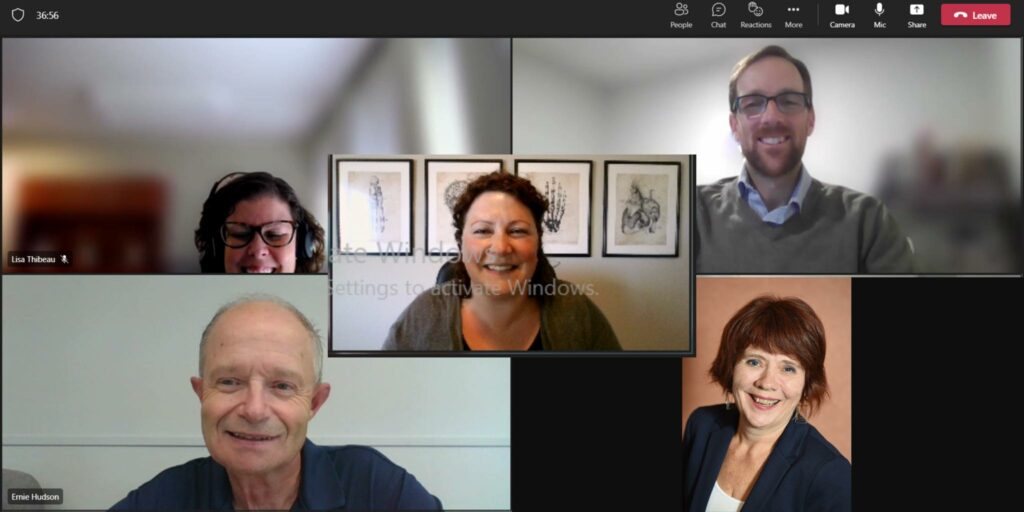 CAMRT-ATL was also pleased to meet with the Green Party shadow minister of Health and Wellness, Michelle Beaton. From the information given at that meeting, Michelle was able to write a letter in PEI’s Guardian newspaper on the wait times Islanders were experiencing. You can read the article HERE.

CAMRT-ATL was able to meet with the Tanya Penney, Senior Executive Director at the Ministry of Health and Wellness, as well as Dr. Tim Mailman, Senior Medical Director, Diagnostic and Therapeutic Services and Lewis Bedford, Director, Diagnostic and Therapeutic Services. We were able to give them documentation on the National Mental Health Survey, the CAMRT Position Statement on burnout, the National Salary Scale and the latest HHR survey.

CAMRT-ATL was also able to meet with the Liberal Party shadow minister for health, Paul Dinn. 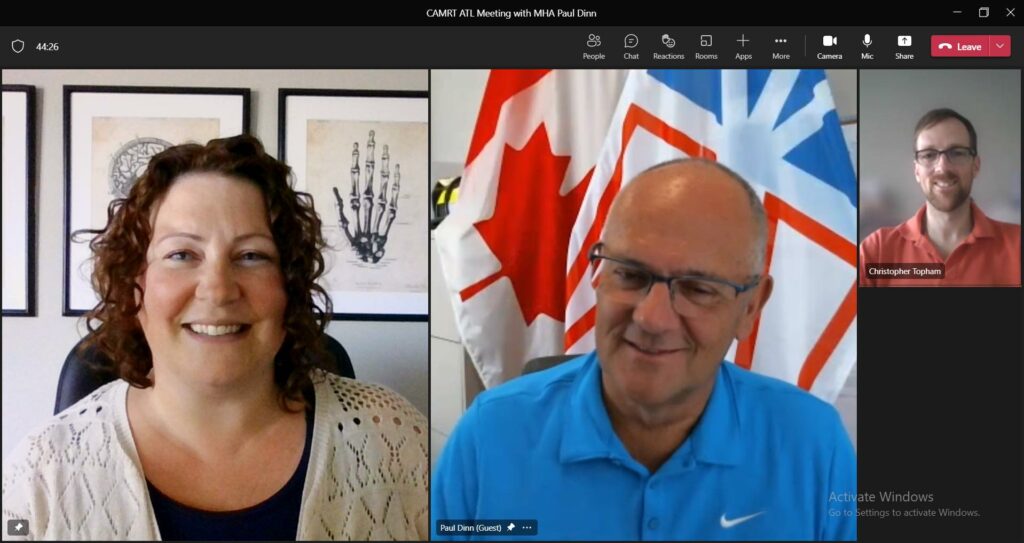 CAMRT-ATL also met twice with Justin Caines, Legislative Consultant with the Department of Health and Community Services regarding the regulation of the MRT profession in the province.

CAMRT-ATL is committed to responding quickly to the issues that matter to Atlantic MRTs. Thanks to our members, we have been alerted to various news items related to MRTs and we have been able to respond in the media.

CBC New Brunswick released an article: Horizon Health working overtime in March to clear MRI, mammogram backlog talking about the use of overtime to lessen the wait times in the province. While in the short term, overtime can be used, it should never be considered a long term strategy. CAMRT-ATL issued a Press Release . From that CAMRT-ATL interviewed by CBC and was featured in a follow up article:  New Brunswick medical imaging technologists suffering from pandemic burnout.

When Health PEI and the Government of PEI announced there would be a retention bonus initiative for select staff that did not include MRTs, we sprang into action. CAMRT-ATL sent a letter to Health PEI CEO as well as Minister Hudson, outlining that this is not only disappointing but demoralizing. We urged them to strongly reconsider the exclusion of this essential profession.

CBC Newfoundland released an article: Flying to Toronto for cancer treatment because of staff shortage not an easy decision, says N.L. woman referring to the shut down of a LINAC due to inadequate staff at the Dr. H. Bliss Murphy Cancer Centre. CAMRT-ATL issued a Press Release and contacted CBC to outline the strain Radiation Therapists we under in the province. Due to the information given in the press release, CAMRT-ATL was interviewed by CBC and appeared in the article: Lack of radiation therapists will hurt N.L.’s cancer-care plans, says union. The CAMRT-ATL was also featured on CBC Newfoundland’s television news program Here and Now. The interview starts at 4:18. 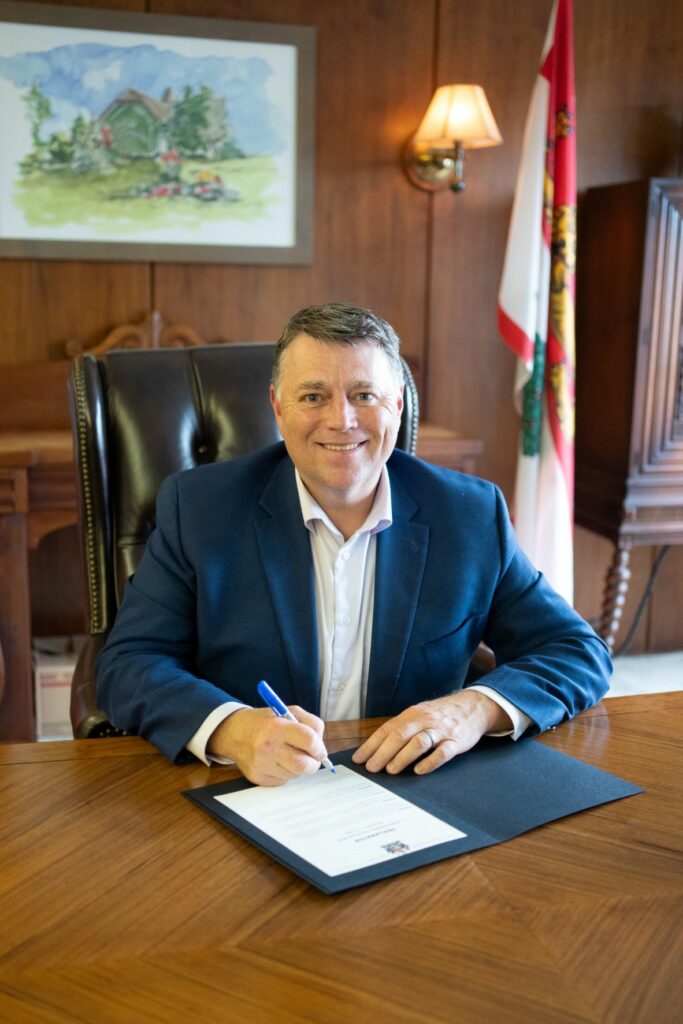